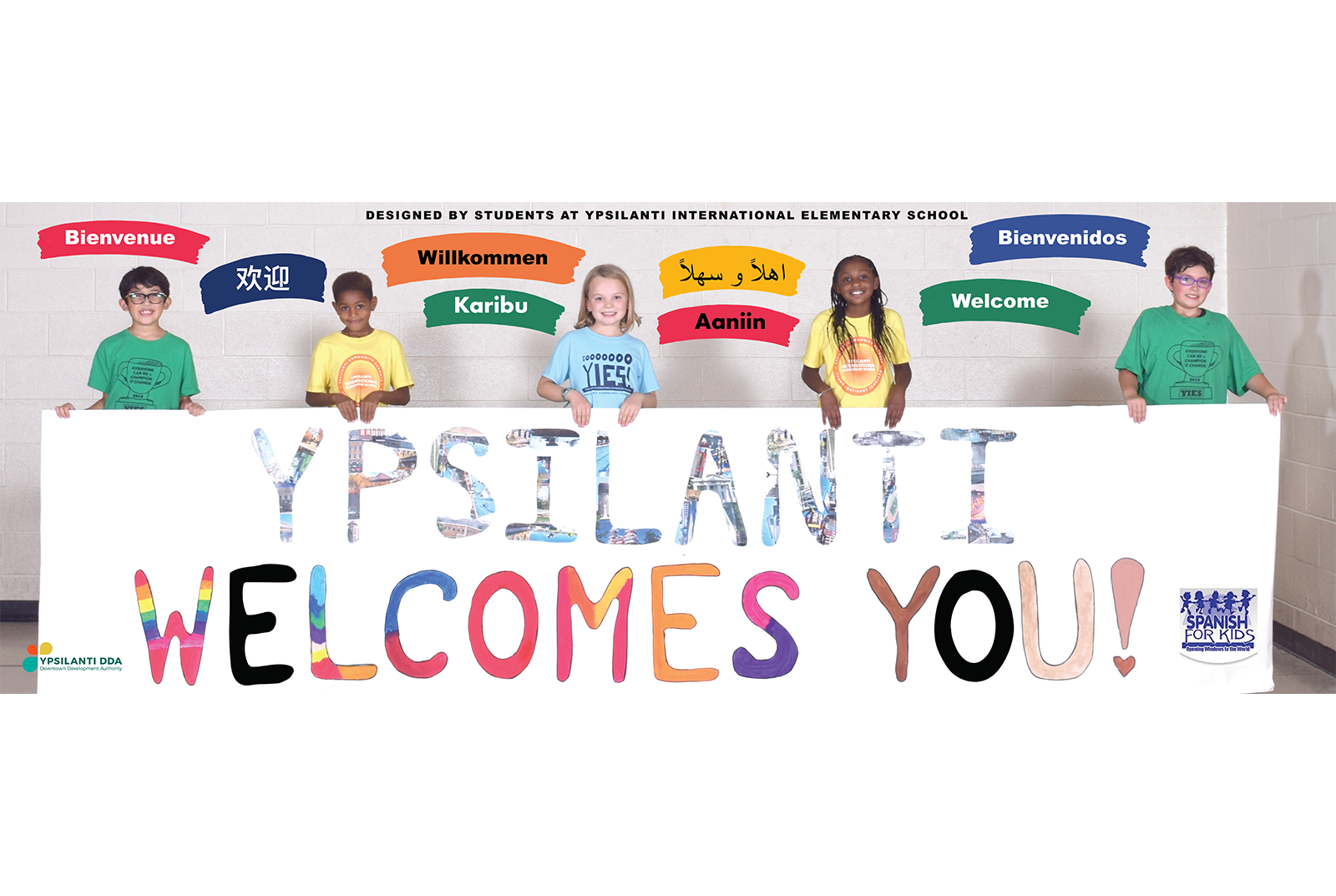 A conversation about diversity during a third year Spanish course at Ypsilanti International Primary School (YIES) last year was the catalyst for a new welcome sign in downtown Ypsilanti on Huron Street near Ypsi Hardware and Go! Ice cream.

The new billboard reads “Ypsilanti Welcomes You” and features the word “welcome” in English and seven other languages, including a Native American language, Spanish and Mandarin. Some of the YIES students who created the panel are also depicted on the billboard.

Celeste Green has been offering Spanish lessons to elementary school children for approximately 20 years through her company, Spanish for Kids, and has been contracted to provide services at YIES since 2016. She says that during a lesson, Ivie Mangrum, then in third grade (now 10 and in fourth grade), remarked during a Zoom lesson that led to Billboard 10 months later.

“We said there weren’t many signs in different languages ​​in Ypsilanti,” says Mangrum. “It didn’t look like we were welcoming people in. So we talked about it and thought we should do something about it.”

Green immediately said, “You’re right” and promised to contact city officials. The initial idea was to hang banners on streetlights, much like the Eastern Michigan University signs posted around town. Green ended up presenting the idea to the Ypsilanti Town Center Development Authority.

“But they said, ‘Hey, we have a bulletin board that we specifically want to use to post messages to the community,'” Green said. “They loved the idea. They thought it would be great for the students to send a message to the whole community that we want the whole community to know that we welcome you here at Ypsilanti.”

The process took nearly 10 months, including attending town meetings and collecting student feedback on the design. The students researched the most commonly spoken languages ​​in Ypsilanti. They were aided by teachers and staff, including art teacher Kathy Fisk and grade three homeroom teacher Aimee McVay.

“There were a lot of languages, some of which I had never seen before. It was so cool,” Mangrum says.

The word ‘Ypsilanti’ is made up of a collage of photos of landmarks around Ypsilanti, restaurants, schools and parks at the Ypsilanti water tower. The word “Welcome” is painted in rainbow colors to represent the LGBTQ community. And the word “You” is painted in a variety of skin tones, from light to dark.

“One of our students made the exclamation mark into a heart to show we love you,” Green said.

Green says she feels the billboard and the process behind it shows that “if we welcome people in and work together, great things can happen.”

“A little chat with a third-grader sent a huge message to the whole community,” Green said. “One of the things we talk about at YIES is that if you see something that’s problematic, you should try to take action. If that’s not an example of seeing something and taking action, I don’t know. what it is.”

Sarah Rigg is a freelance writer and editor in Ypsilanti Township and project manager of On the Ypsilanti field. She joined Focus as a news editor in early 2017 and occasionally contributes to other Broadcast Media Group editions. You can reach her at [email protected].