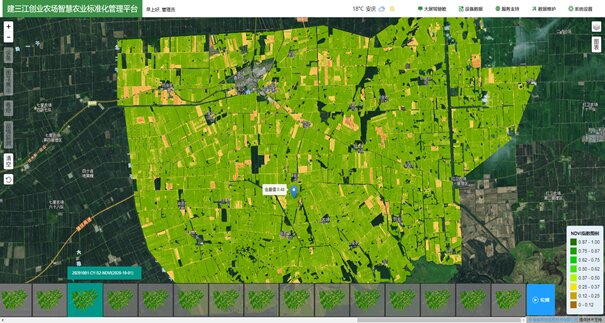 WeChat app to improve agricultural practices and the environment in China

Agriculture in northeast China, where most of the country’s fertile black soil is found, has been recognized as crucial to Chinese food security. However, the soil is in critical condition due to years of intensive production and overuse of fertilizers.

In the international collaborative Sinograin II project, supported by the Norwegian Ministry of Foreign Affairs through the Royal Norwegian Embassy in Beijing, Norwegian scientists from NIBIO are collaborating with Chinese agronomists to improve food security. As part of the project, scientists developed a service delivery system to equip farmers and local authorities in northeast China with a decision support tool. It offers important and timely recommendations on selected agricultural practices such as site-specific fertilization.

“The system includes a more detailed web version for agricultural technicians and extension service providers and a WeChat version for farmers. We know WeChat is very popular in China and farmers will use it, ”says Krzysztof Kusnierek, scientist at NIBIO.

China is now the world’s largest producer, consumer and importer of chemical fertilizers, accounting for over 30 percent of global nitrogen (N) fertilizer consumption. However, poor management of nitrogen fertilizers is common. The Chinese government is aware of the issues and promotes the best practices to be implemented to preserve the black earth and improve food security.

“My Chinese colleagues tell me this is crucial. The government is pressuring local authorities to improve practices, which means they are forced to act and there are financial resources available.” , comments Kusnierek.

This was also important with regard to the development of the decision support tool in the project: “The skeleton of our service delivery system was created by Hainie Zha, PhD student at China Agricultural University. , who works with us in Sinograin II, in cooperation with many programmers in an external company. This work was made possible by funding available from several sources in addition to the project, including local government. It has developed into something bigger than what would be possible without funding from our research project. Now we have been able to implement the science. It’s a tool to bring research to people, ”he says.

NIBIO’s contribution focused on scientific research, cooperation in building agronomic models, as well as involvement in the implementation of the system, explains Kusnierek.

management plan based on soil and meteorological data. At a given times, the system will notify the farmers about the suggested agricultural work to be performed, such as fertilization, plant protection, and irrigation. Credit: Norwegian Institute of Bioeconomy Research”>

“In the system, precise nitrogen management is facilitated by remote sensing technology allowing site specific fertilizer application. We help reduce the amount of nitrogen used, protect the environment and, in some cases, increase yield, ”he says.

According to Kusnierek, there is considerable variation in soil resources in the region: “Some areas require more fertilizer than others. Until a few years ago there was only a regional recommendation for the amount of fertilizer to deploy, and many farmers do this. A single recommended value over a large region did not take into account variations in soil properties. When you have a technology that can show you the variability, then you can recommend the amount of fertilizer in the individual places, suitable for the soil conditions on each issue. soils are a common problem all over the world. It is gratifying to learn from each other in this project and to advance knowledge and technology, ”he says.

The development of the system has focused on the important agricultural region of Heilongjiang Province in northeast China. During the current trial period, some farmers have started using the app, NIBIO scientists inform.

“The satellite image is used as a base map and farmers can draw the boundaries of their fields. They can provide information about their production system and this data is used to query the database with soil, weather and remote sensing data. by clicking on the plot, users receive timely information on the growth status of their crops in the form of a pop-up window. In addition, we can generate the NPK fertilization plan based on the target yield, converted into the amount of fertilizer needed, “says Kusnierek.

The NIBIO scientist says there are also plans to deploy a large number of sensors in the fields to collect microclimatic data, such as temperature, soil moisture, etc. These data will be brought together in a common system, which will be available to users.

“This large, abstract data set for a single user is available to them in the form of a little piece of software built into WeChat. The user just taps on it to use it,” he says.

In the future, scientists are looking to further improve the system: “We are discussing how we can now further optimize the technology. Farmers should have minimum and maximum reference areas that can be used to refine recommendations. We also want to use more drones in the region to collect data more often. Later, the goal is to develop the system in other regions, and perhaps for other cultures.

“It has been great to see that complex agronomic models can be converted into an easily accessible product,” he says and again emphasizes the importance of the support of local authorities in the project. This means that we can see that it is gradually starting to be used. What we do has an impact, ”he concludes.

Per Stålnacke, Head of Research at NIBIO, says this kind of international research collaboration is vital for global food security, says: “In order to solve global food production and security, it is of the utmost importance that we cooperate across borders, in order to identify the best practices and tools. The cooperation between NIBIO scientists and the Chinese partner of Sinograin II has obviously had an impact. The tool developed will support better decision making on farms by helping farmers choose the most efficient practices and inputs and respond to climate change and markets with greater efficiency.

Provided by the Norwegian Institute for Bioeconomy Research

This document is subject to copyright. Other than fair use for private study or research purposes, no part may be reproduced without written permission. The content is provided for information only.