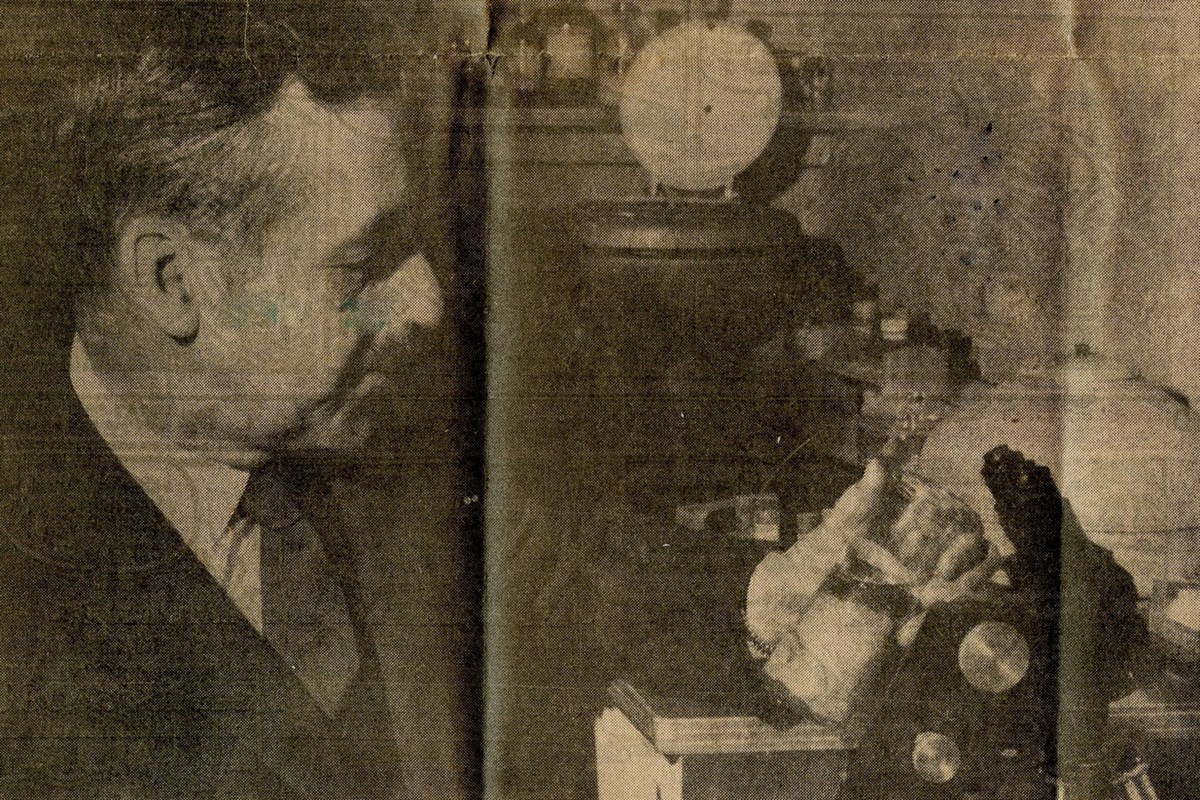 This time a doctor submitted a design for the Canadian flag

Born in Sherbrooke, Quebec in 1912, Jean Pigeon completed his studies at the Petit Séminaire in Quebec before continuing at Lavalle University where he obtained his medical degree at the age of 24.

He received the Governor General’s Award for the highest total marks obtained by a Canadian medical student. In 1938 he moved to Blind River and began working as an associate of Dr. Langlois. Pigeon left for six months for graduate surgery in New York before returning to Blind River to continue his practice.

In his profession, Dr. Pigeon became known for the development of a treatment for burns. His research was conducted at St. Joseph’s General Hospital in Blind River.

In his research paper on this topic, he explained that there was a need for burn treatment due to the possibility of nuclear war. His research involved the use of amniotic membranes (after birth) and its application to areas of second degree burns, which proved to be an effective treatment. His research has been published in the Canadian Medical Association Journal.

Dr Pigeon spent a lot of time trying to improve medical practices and procedures and due to a lack of money to fund research, he stressed the importance of financial aid from governments for new research.

He was also an advocate for the regulation of gas appliances used by the general public to prevent unnecessary deaths from carbon monoxide poisoning.

As a coroner and doctor, he often had to treat people, especially campers who had suffered from carbon monoxide poisoning in their trailers or small homes.

“In my opinion it is dangerous in such dwellings to use them unless the products of combustion are vented directly through a flue to the outside,” he said in a 1960 Sault Star article.

His interest in public health was recognized by the London Society in 1964. He was outspoken against pollution, particularly the impact of Elliot Lake’s uranium mining process.

He said mining posed a danger to both human life and wildlife. In addition to recognition from the London Society, Dr. Pigeon has been recognized by the Royal Society of Health and received the Order of Merit in Ottawa.

In 1966, he was appointed Blind River’s Medical Officer of Health. In 1970, he gave a lecture on the pharmaceutical benefits of cannabis when authorities wanted to crack down on the substance.

“Doctors, nurses and parents as well as other leaders of society should seek the truth rather than exclude considerations of threatening dangers to the younger generations and attempt to suppress them,” he said. declared.

He explained that decisions should be based on scientific evidence when it comes to health policy.

Perhaps one of the most interesting anecdotal pieces about Dr. Pigeon’s life was outside of the medical field.

He submitted a design for the Canadian flag. His proposed design for the flag was described as having a blue border since Canada was virtually surrounded by water.

It incorporated red to represent the courage of Canadians who stood up for their freedoms and white to represent Canadians’ love of peace. In the center of the white background was a green maple leaf as it was a symbol of Canada.

Dr. Pigeon explained that credit for completing the flag should be given to the Sisters of St. Joseph’s General Hospital who allowed their seamstress, Mrs. J. Anson, to make the flag.

In 1971, Dr. Jean Pigeon died at the Ottawa General Hospital at the age of 58, leaving behind his wife Marguerite and seven children. He was remembered by his community as a man loved by all, but who also contributed to the advancement of medical science in Canada.

2022-07-10
Previous Post: Ascites can be managed by Ayurvedic formulations including Neeri KFT
Next Post: Open letter to the Minister of the Environment