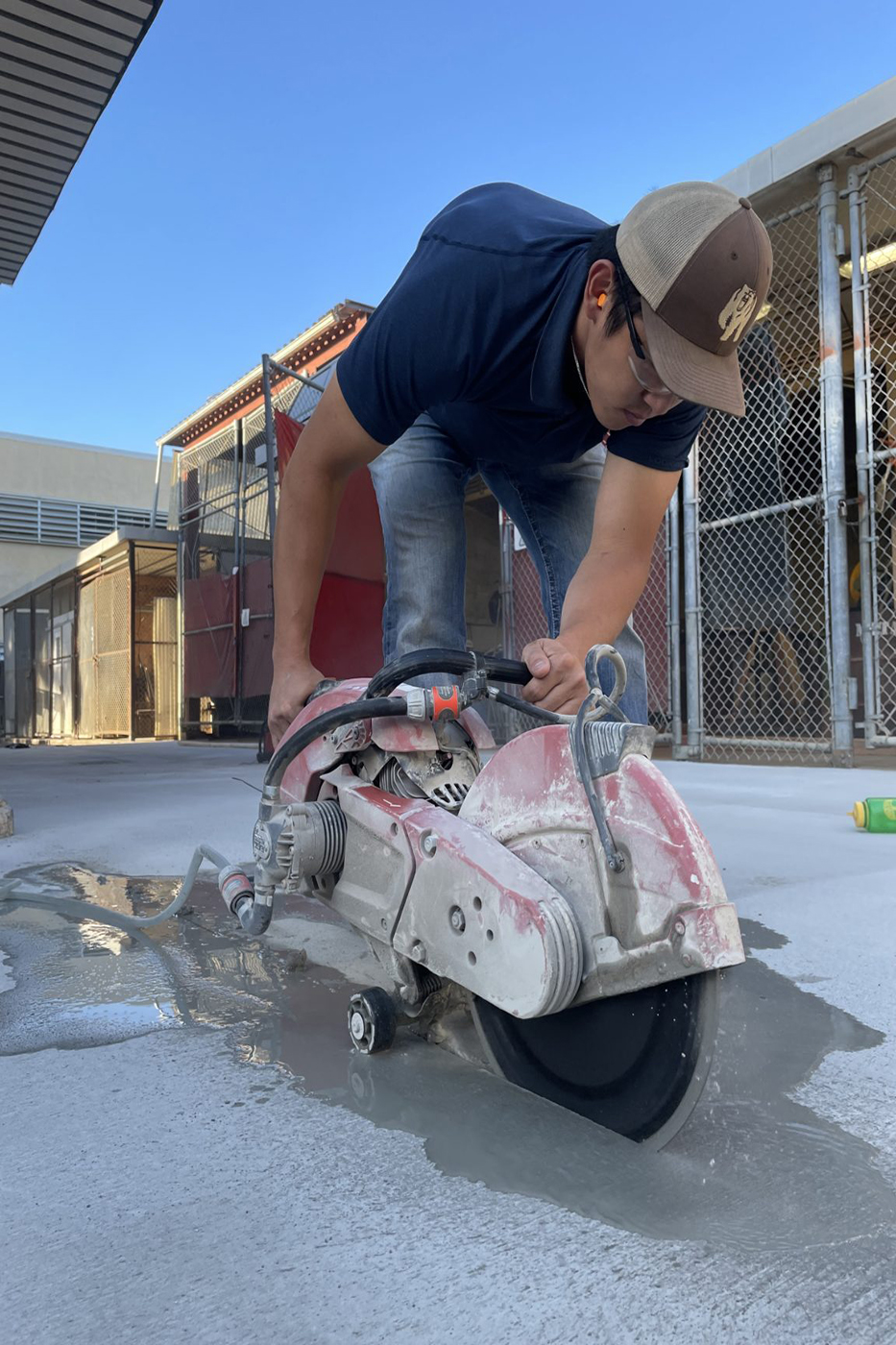 When the Chairman of the Construction Management Department asked Nathan Horst and Steven Zheng to renovate the College of Architectural and Environmental Design (CAED) Help Desk in early summer, Horst’s first thought was : “Wow, this is a great project to undertake”.

The majority of senior construction management projects are research-based, which means an article written on a construction-related topic.

CAED’s support shop sits behind a rusty fence, surrounded only by gravel and uneven soil between the construction management building and the architecture studios. The dilapidated workshop is full of tools, machines, and resources such as laser cutters, CNC machines, and 3D printers, and is home to many courses at Cal Poly. The rainy days caused flooding so trucks could not access the workshop or storage bays due to the difference in elevation between the gravel and the existing slab. Students with disabilities could not access the building at all.

With the help of a handful of students from American General Contractors (AGC), Horst and Zheng worked on the store all summer and it opened to students at the start of the fall term. The students built the necessary schedule, designed the updates, and built the concrete slab to meet the needs of the CAED shop.

According to Horst, the experience of looking at construction like pouring concrete is something most construction management majors only get during summer internships.

â€œBeing able to do this firsthand, with our boots in the concrete, alongside CalPortland, has been the best experience. It was a feeling I hadn’t had before this senior project. It’s good that now wheelchair students have access to such an impressive resource on campus, â€said Horst. â€œIt’s just a much safer space now for everyone. ”

Mustang News reporter Kyla Miller spoke with Horst and Zheng about their time working in the store.

Why did you decide to embark on this project?

Horst: At the start of this project, the area surrounding the cathedral of CAED’s support workshop was just gravel and dirt. The problem with this was that people in wheelchairs couldn’t access the workshop at all and the amount of usable workspace was limited in general. In addition, this area had recurring drainage problems. It would literally start to flood.

What have you built? Why not take the easier route?

Horst: Our main project is best described as the design and construction of a concrete slab for the CAED support shop with the installation of underground utilities including electrical conduits and storm drains. Our manager contacted me in early summer about this opportunity to help do something the CAED shop has wanted to do for about five to six years now. I knew Steven was going to be a great asset to the project.

What challenges did you encounter during the duration of the project?

Zheng: There was already a ton of concrete existing in the storage bays and the cathedral itself. So not only did we have to tie into that, but we had to maintain a 2% slope all around. While we were digging for our concrete pour, there were tons of unmarked underground utilities that we did hit, pushing back our construction.

How did this impact the overall completion of the project?

Zheng: Fortunately, in our schedule, we incorporated a ton of floats, which meant we had a margin of error, so everything worked out perfectly. But there were definitely times when we both doubted our ability to complete the project on time, which took very long days.

Was the timeline you established based on the project deadline?

Zheng: This project was on campus, so we had very firm deadlines that we had to meet just because the students had to have access at the start of the school year. I will also add that Nathan and I worked full time internships throughout the duration of our senior project, so the majority of the construction took place at night from around 4pm to 9pm every night.

How did you get the funding and the material? Has it been given?

Horst: When [construction management department chair] Dr Woo contacted us, CalPortland had already offered to donate all the equipment and a few workers to help us. We also reached out to Wallace Group and they donated their time to walk us through the design process which was nice. Obviously there were a ton of small sundries like daily trailer rentals and dump ponds that we had to call the companies on site to explain the project and ask if they wanted to donate.

Horst: Yep, everything has been given away, especially explaining that it would benefit the entire Cal Poly community, especially people with disabilities.

Did anyone else from Cal Poly or the Construction Management Department help you along the way?

Horst: We also had the support of AGC, which is the American general contractors club, within the global Associated Students Construction Management club. They came and helped tie up the rebar, as well as place the concrete during our pourings. It was great for us and gave these students a real learning by doing experience.

How do you feel about completing the project and seeing the support store in use now?

Horst: It’s good that now wheelchair students have access to such a great resource on campus. It’s just a much safer space now for everyone. I feel super grateful that I even had this opportunity. Seeing how it all finally fell into place, how much we imagined it, reassured me in everything I am capable of.

Zheng: You take everything you learn in the classroom and in the lab and take it to the field. It’s a completely different experience, one that I wouldn’t repeat for the world.

The interview has been edited for length and clarity.