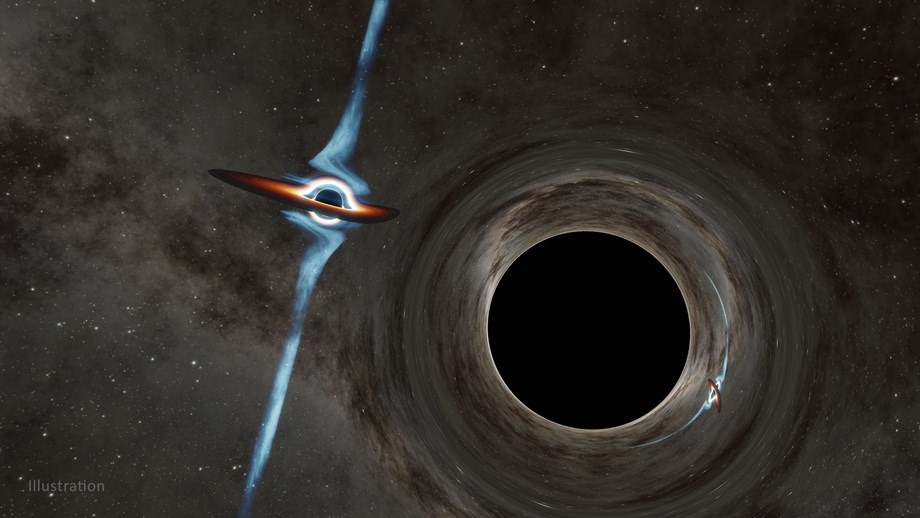 A team of astronomers observing a supermassive black hole 9 billion light-years away has reported signs that it has a companion black hole orbiting it. The huge duo – called binary – circles about every two years and the pair will merge in about 10,000 years.

Caltech researchers in Pasadena have been monitoring more than 1,000 blazars – supermassive black holes with Earth-facing jets – with the Owens Valley Radio Observatory in Northern California for 13 years as part of a general study of the behavior of blazars.

They noticed a blazar named PKS 2131-021 exhibiting strange behavior – its brightness showing regular ups and downs as predictable as the ticking of a clock. The researchers believe this regular variation is the result of a second black hole pulling on the first as they orbit each other.

As black holes spiral toward each other, they increasingly disrupt the fabric of space and time, sending gravitational waves through the universe, researchers say.

Two black holes are heading towards a collision. Astronomers have found a supermassive black hole 9 billion light-years away with another black hole orbiting it. As this orbit shrinks, the pair – called binary – moves closer to merging. https://t.co/b9yqLpy429 pic.twitter.com/GRn4hLSBf3

“This work is a testament to the importance of perseverance. It took 45 years of radio observations to produce this result. Small teams, in different observatories across the country, took data week after week, month after month, to do this is possible,” says Joseph Lazio of NASA’s Jet Propulsion Laboratory (JPL) in Southern California.

Lazio and Michele Vallisneri, both astrophysicists at NASA JPL, provided insight into how supermassive black holes behave in a binary system and how to interpret radio data.