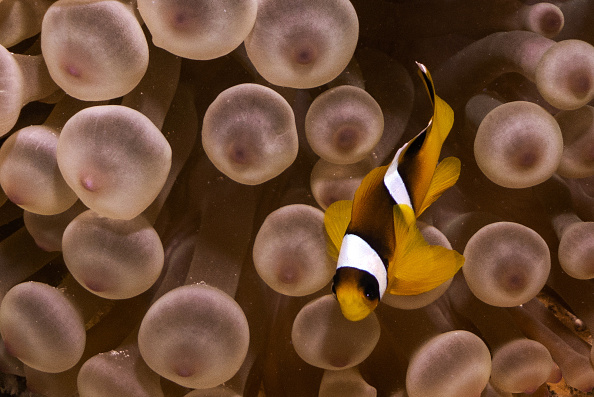 Clownfish’s mutualism with the marine environment may be revealed via a new resource: researchers

Clownfish may have become famous as a result of the popular film “Finding Nemo”, but few people know that these attractive orange and white fish have enormous scientific potential.

They can help scientists solve a wide range of biological problems, from the spread of larvae in the deep sea to the reaction of coral reef fish to climate change.

Researchers from the Okinawa Institute of Science and Technology Graduate University (OIST) have assembled a complete genome of the false clownfish (Amphiprion ocellaris) to help discover these answers.

The future of clownfish


The false clownfish can be found in tropical and subtropical waters, and its existence depends on sea anemones and therefore the coral reef, according to ScienceDaily.

Their numbers, like those of many other coral reef fish, are expected to decline as coral reefs shrink due to climate change.

This species resembles the real Nemo, the orange clownfish, although they live in different places.

Although the false clownfish genome has been discovered previously, the latest research has generated by far the highest quality version.

The researchers said this was because their version was chromosomal.

The genome of the false clownfish is like a detailed instruction manual housed in each of its cells. It includes all the information necessary for the functioning of the fish.

Previously published false clownfish genomes consisted of a mix of genes or bits of genes with little understanding of how they were organized on the chromosome.

The genome is more fully constructed in this recent study.

False clownfish were obtained from Onna-son, Okinawa, for this study.

The researchers collected their DNA and RNA and assembled their genomes on chromosome size using sequencing techniques.

They could then begin to address some of the biological issues.

Both clownfish organisms belong to the clownfish subfamily, which has a total of 28 species of fish.

The researchers decided to analyze the genomes of the two species to see which genes they shared and which the other 26 species lacked.

Sea anemones are sea creatures that reside on the surface of coral reefs, according to National Geographic. They use stinging cells called nematocysts on their tentacles to capture their prey.

When a small animal comes into contact with the tentacle of an anemone, the nematocysts release poisons.

The stung animal is rendered immobile, allowing the anemone to easily drag it into its mouth for digestion.

While most fish succumb to these venomous stings, clownfish secrete a chemical in their mucus that prevents nematocysts from firing.

This allows the clownfish to float comfortably between the anemone’s tentacles, providing a safe habitat where potential predators are killed by the anemones’ stings.

This is obviously beneficial for clownfish, but what about sea anemones? It turns out that the clownfish, with its brilliant colors, attracts other fish in search of a meal.

Related article: Sounds fishy: Clownfish are making calls to show off their status in social groups

© 2022 NatureWorldNews.com All rights reserved. Do not reproduce without permission.