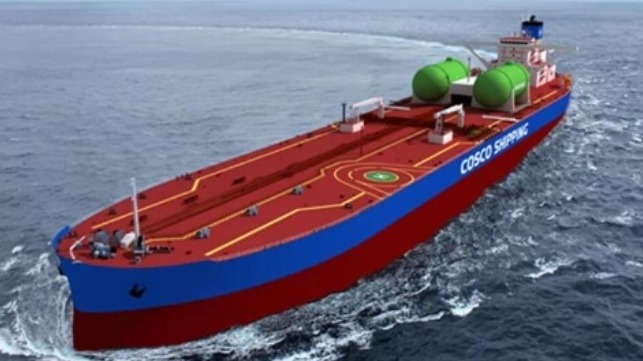 Chinese company COSCO Shipping has announced that it has received what may be China’s first approval in principle from major classification societies for the design of an ammonia-fueled VLCC. Previously, South Korean shipyards announced their ammonia designs in the race to develop the first zero-emission transportation solutions.

Among the many alternative fuels currently under study, ammonia, which does not produce carbon upon combustion, is considered to be one of the most promising solutions for eliminating greenhouse gas emissions in the world. industry. It is extensively researched by both engine manufacturers, including MANN and Wartsila, as well as major shipbuilders.

The joint R&D team carried out extensive research on the application of ammonia fuel for a VLCC. Among the efforts they undertook was research on optimization of vessel type parameters, general vessel layout, selection and arrangement of ammonia tanks, research on fuel system to ammonia and a risk assessment analysis.

This type of vessel was based on the latest generation of 310,000 dwt VLCCs jointly developed by COSCO SHIPPING Heavy Industry and China Shipbuilding Ocean Engineering Design and Research Institute. While ensuring the advancement of various performance indicators, the design was based on the use of MAN ammonia main engines. The design included two 6000m Type C ammonia tanks. According to COSCO, the ship will have the capacity to make a round trip on the Middle East route.

The design has received ABS and China Classification Society approval in principle (AiP). COSCO said the successful research and development of this type of vessel has provided technical reserves that they hope can be used for future market acceptance of zero carbon fuel vessel types.

South Korean shipbuilders have so far led most of the research on building ammonia-fueled ships. Hyundai Heavy Industries and Korea Shipbuilding & Offshore Engineering Co. said in September that they had jointly received the first approval in principle for the design of an ammonia transporter with ammonia propulsion granted by Bureau Veritas. Samsung Heavy Industries also received several approvals, including from Lloyd’s Register for an ammonia fuel tanker design and DNV for a VLCC that would be ammonia ready. Daewoo Shipbuilding & Marine Engineering and MAN Energy Solutions also received approval for a 23,000 TEU ammonia-fueled ultra-large container ship design.