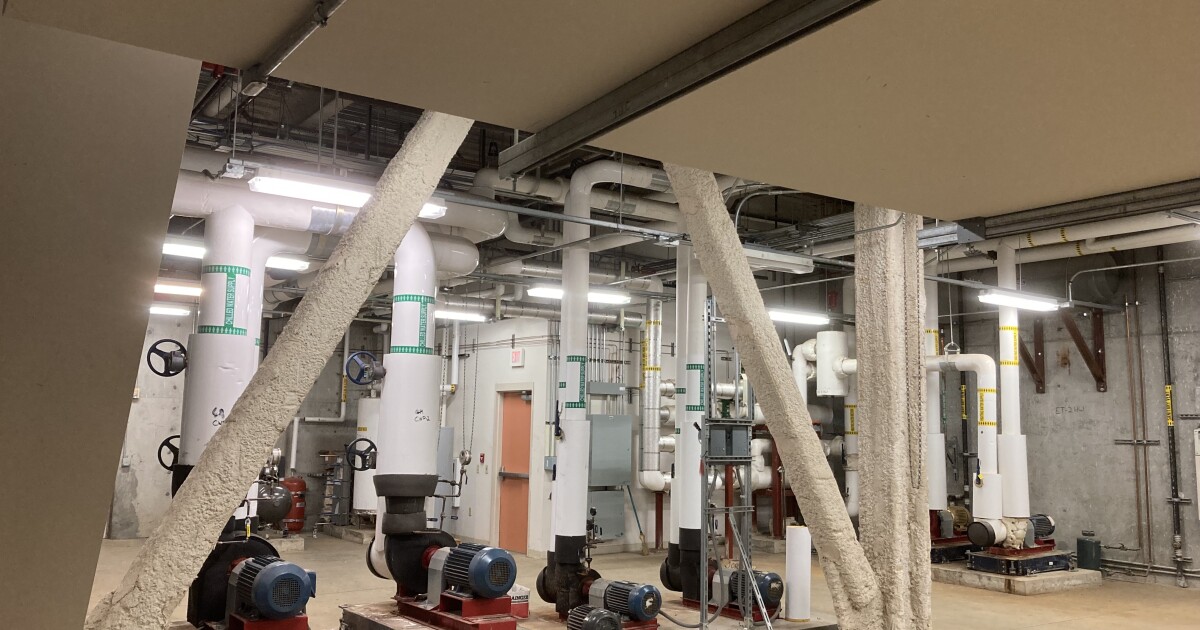 Building design may need to adapt to living with airborne viruses

There is a huge metal gate just outside the UCSD Computer Science and Engineering building. It’s as long and wide as a Greyhound bus – in fact, a bus would probably fit in the concrete room under the grate.

“It’s the air from the outside,” said Rajesh Gupta, a computer science and engineering teacher at the school.

The building’s complex machinery constantly draws in outside air.

“So pretty much every tall building will have a socket like this,” Gupta said.

And systems like these may need to be changed as officials continue to deal with airborne viruses like COVID-19. Heating and cooling systems were not designed to protect residents during a pandemic.

Outside air is drawn in and drawn in through a wall of filters. These filters are effective enough to ensure that the air pumped into the building is relatively clean, but they do not have the same level of filtration that a person would find in a local medical building.

“It’s the supply side,” Gupta said as he passed four very large chambers, each accessed by a sealed door that looked like a submarine.

Fans are the heart of this building’s air distribution system, according to Johnson, who said they were powerful enough to push massive amounts of air through the four-story structure.

Keeping this system running is crucial because, as Gupta points out, the building’s windows don’t open.

But there is a trap in saving energy.

Recirculating air can push virus-contaminated aerosols inside a building, which can increase infection rates. It’s something researchers in New York noticed in their tall buildings at the start of the pandemic.

So Gupta and his colleagues at UCSD began researching how to change airflow patterns in buildings and even rooms.

“I can actually control every room in this building,” said UCSD graduate student Xiaohan Fu.

Fans can be turned on to circulate more air when people are detected. And less air when rooms are empty.

“They can send a very simple request to our server,” Fu said.

The building’s computer brain, located in the basement near the massive ventilators, uses carbon dioxide sensors to detect when people are in a room, so building managers don’t have to constantly check on them.

The whole system is designed to minimize exposure to a virus like COVID, but that’s not enough according to a leading atmospheric chemist.

“We spend 91% of our time indoors. And the air we breathe indoors is often much worse (than outdoors),” said Scripps Institution of Oceanography researcher Kim Prather.

According to Prather, infected airborne particles can accumulate in an enclosed space, like invisible, odorless second-hand smoke.

But, she says, making complicated or expensive changes to a building’s existing heating and cooling system might not be enough.

“That makes a few. It filters out some of it,” Prather said, “but when you have such an infectious virus, you don’t need to breathe in a lot of it. And therefore, it is not enough in itself.

Masking remains a crucial strategy to combat the spread of COVID-19, but Prather stresses that it’s not the only tool.

Prather is a big supporter of Corsi-Rosenthal boxes. This is an ordinary box fan above four highly rated furnace filters.

The do-it-yourself device can clean 90% of a room’s air in just 15 minutes, and it doesn’t cost hundreds of dollars like some high-efficiency commercial HEPA air filters.

“They actually outperform HEPA, which I appreciate during the pandemic,” Prather said. “They are faster. They pump in a lot more air, a lot faster.

Homemade cans also circulate a room’s air, removing pockets of infected aerosols that can build up in a room’s swirls, she said.

The devices caught the eye of Rajesh Gupta.

He places his hand on a Corsi-Rosenthal box set up in the common area of ​​a UCSD computer lab.

“It cleans the air, much cheaper,” Gupta said. “Because all you have to do is find or buy all four filters and put a $40 fan in them.”

Pop-up filters are more cost effective than spending hundreds of thousands of dollars to upgrade a building’s air filtration system, but they are a stopgap solution.

Gupta said that eventually building design will need to adapt to better protect people from airborne viruses like COVID-19.